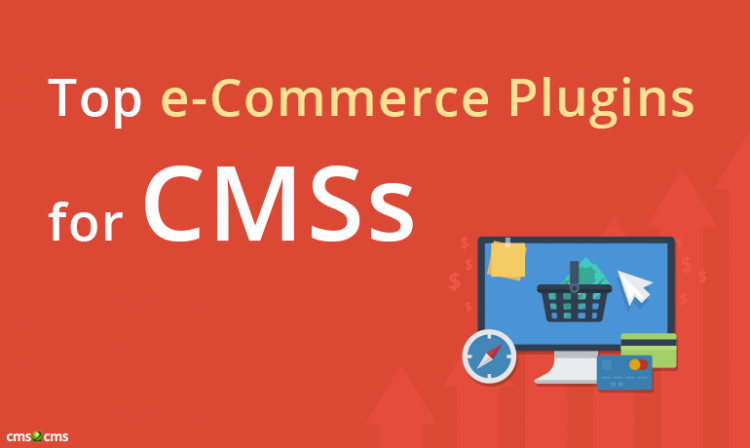 Ever thought of turning your CMS-based website into an e-shop? Or maybe just adding a small merch store to your site? Well, that’s not a problem. All it takes is finding a robust e-Commerce plugin and a few mouse clicks to install it. Several minutes later (or hours) and — voilà! — you now have a full-scale e-Commerce framework and your very own retail business. Sounds alluring, doesn’t it?

Today, we’ll help you to choose the most optimal solution and get a crash course in top e-Commerce plugins for CMSs.

WooCommerce is a free, open source WordPress e-Commerce plugin trusted by hundreds of thousands of store owners. Released in 2011, WooCommerce has demonstrated a phenomenal growth in user base and now accounts for 24.6% of online store worldwide. Combining the virtues of being flexible and functionally powerful yet user-friendly, it has become one of the fastest growing shopping cart software of all time.

WooCommerce is a perfect choice for small and middle-sized stores if setup properly. Lightweight and fast, it’s able of running smoothly even on a shared $5 hosting, making its entrance price hilariously small. Woo is also compatible with a staggering number of extensions and plugins, as well as every WordPress theme out there.

WP eCommerce is proudly calling itself “The original WordPress eCommerce plugin” and was a top solution back in the “pre-WooCommerce era”. Launched in 2006, WP eCommerce has been helping merchants building their online retailers for more than 10 years now. It’s fairly lightweight, SEO-friendly, easily integrable with WP multi-store (the feature WooCommerce lacks) and offers a number of payment gateways straight out-of-the-box.

That said, the set of features the “original WordPress eCommerce plugin” comes off-the-shelf is pretty basic. Due to a very humble number of extensions, it’s hard for WP eCommerce to compete with WooCommerce in terms of a high-end functionality.

VirtueMart is a full-featured, scalable e-Commerce plugin that has received a grand popularity among Joomla! users. Actively developing since 2005, Virtue is capable of meeting nearly any thinkable needs of any kind of e-retailing business, including big-sized stores.

Despite the complexity of Joomla! CMS itself, VirtueMart has a refined and intelligible user interface backed by a clear and detailed documentation. Also, it’s often praised for its high-quality direct support, as well as an extensive community.

Perhaps, the only “weak side” of VirtueMart are the themes, which often leave to desire more in terms of modern look and responsiveness. Moreover, they’re difficult to customize: even minor tweaks may take several hours and more than a basic knowledge to perform.

HikaShop is another progressive and functionally advanced e-Commerce framework, “Magento of Joomla!”, if you will. Although it looks quite at first sight, HikaShop possesses all high-end functionality you may desire a shopping cart to have. That said, the default external look of Hika is pretty dull, to be honest, but that seems to be a flaw of all Joomla! carts.

It can also boast about a powerful arsenal of marketing features, as well as a large number of languages, currencies, zones and advanced taxes. All these makes Hika an optimal choice for a rapid and aggressive expansion of an international market.

To cover the needs of everyone, there are 3 editions: HikaShop Starter, HikaShop Essential and HikaShop Business. While the first one is free (and seriously functionally limited), HikaShop Essential (designed for small stores) costs €45.95, and Business edition (for a big-sized store) is priced for €99.90. No monthly fees required.

UberCart (no, not the taxi app) was released back in around and hasn’t been losing its leading positions among the other Drupal e-Commerce plugins since. Being relatively easy to set up, UberCart possesses a jealously broad set of default features — literally everything you need to build a professional store with virtually zero 3rd party integrations.

Thanks to its simplicity and developed ecosystem, UberCart is arguably considered to be a #1 e-Commerce solution for newbie Drupal users or merchants willing to build a small, but good looking store. The only significant flaws Uber is often criticized for are it’s overcomplicated inventory management, and somewhat limited customization possibilities.

Though being developed by the same people who stood behind UberCart formerly, Drupal Commerce sticks to entirely different philosophy than Uber does. While UC is ready to go off-the-shelf and no modules installed, Commerce requires much twisting, tweaking and modules installation before setting off. Moreover, Drupal Commerce possesses a surprisingly modest default functionality, which may be confusing at first.

The thing is, the developers have stripped DC features, spreading its functionality among a number of modules instead. This gives merchants an opportunity to decide what features they need or not themselves, thus increasing a performance significantly. As the result, Drupal Commerce is a much more flexible, scalable and powerful solution than UberCart is, but it requires much more time and efforts to get everything put together too.

All in all, Drupal Commerce is a great choice tech-savvy users with reasonable tech skills a bit e-Commerce ambitions.

Already own a store but willing to give any of these plugins a try? That’s not a problem – perform an automated shopping cart migration using Cart2Cart and get all your store data transfer to the desired platform. Start with a free Demo now!

Willing to put your web project a step forward towards success? Make use of CMS2CMS automated migration service and migrate to WordPress, Joomla or Drupal without shelling out for a developer.